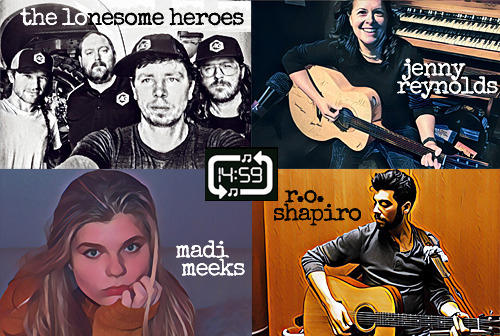 Four bands play five sets in under two hours -- speed dating for live music, a house concert on steroids, a tapas bar of your next favorite bands -- you know the drill!

We're back at Aveda Institute Austin, in the north Austin Highland neighborhood, near ACC Highland and the Austin Film Society Cinema, between the bus station and Jerry's Artarama. It's behind Gold's Gym, which faces Middle Fiskville Rd.

This time around, we've got singer songwriters Jenny Reynolds, R.O. Shapiro, and Madi Meeks plus Americana band The Lonesome Heroes

You'll be in one of four audience groups that rotate through four performance spaces at AI Austin, listening to 15-minute sets by each act along the way. Then the audience groups break up and for the closing fifth set, which is 20-30 minutes long, you get to create your own encore and listen to whoever you'd like.

All done in under two hours!

This event has ended